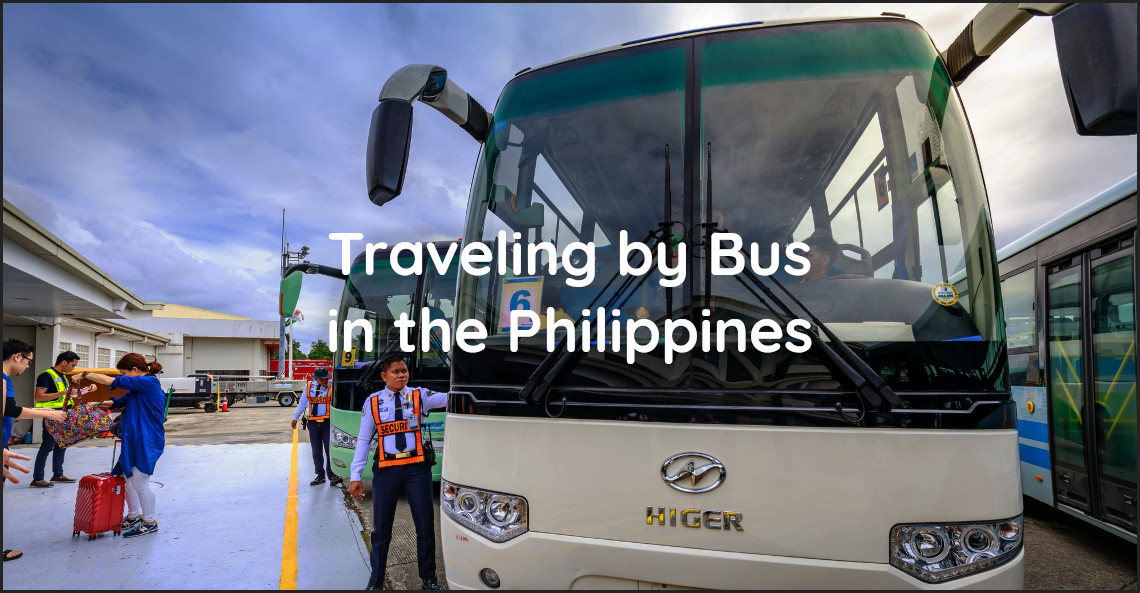 While it’s not as popular as jeepneys, the bus is still a widely-used means of transportation to get around the Philippines, especially on larger islands and for long-distance travels.  It is even used to transfer from one island to another in conjunction with the country’s RoRo System or the Road Roll-on/Roll-off Terminal System, a vehicle transport system in the Philippines.

This article covers information about buses including the types of buses, Philippine Nautical Highway System, and useful tips when riding a bus in the Philippines.

Like the jeepneys, buses in the Philippines come in varying sizes and colors.  But unlike jeepneys in which one person can own a unit, buses are usually with a company and there are lots of bus companies all over the country.

Passengers can get on and off a bus in bus terminals but it’s not unusual to see one stop and pick up or drop off a passenger along the road.  Bus terminals in major cities are usually well-built structures complete with restrooms, cafeterias, and even ticket booths and ATMs.  But in some parts of the country, bus terminals are merely makeshift sheds without even a restroom.

Buses run on schedule but it’s not unusual for them to be late since most drivers leave only when the bus is full.

Types of buses in the Philippines

Buses in the Philippines are categorized into two:

The big bus seen on national highways is a provincial bus.  It plies through provinces and connects major cities or towns.  The provincial bus is classified further depending on its amenities.

Considering that most streets in the cities are narrow, the bus is not the most favored means of transportation to get around the city as it can intensify the traffic congestion.

They are available in two classes:

With more than 7,000 islands, traveling from different cities and island to island can be challenging as it takes longer hours and costs higher but with the birth of Philippine Nautical Highway, it is not the case anymore.  No, there aren’t new bridges connecting all these islands.  The Philippine Nautical Highway is an integrated network of highway and vehicular ferry routes for nationwide vehicle transport.  It connects the islands, particularly the major ones namely Luzon, Visayas, and Mindanao.

The RoRo bus is transported to another island through a RoRo ship which has a ramp for vehicles including buses to drive on and off.

Tips when riding a bus

READ MORE: Transportation in the Philippines