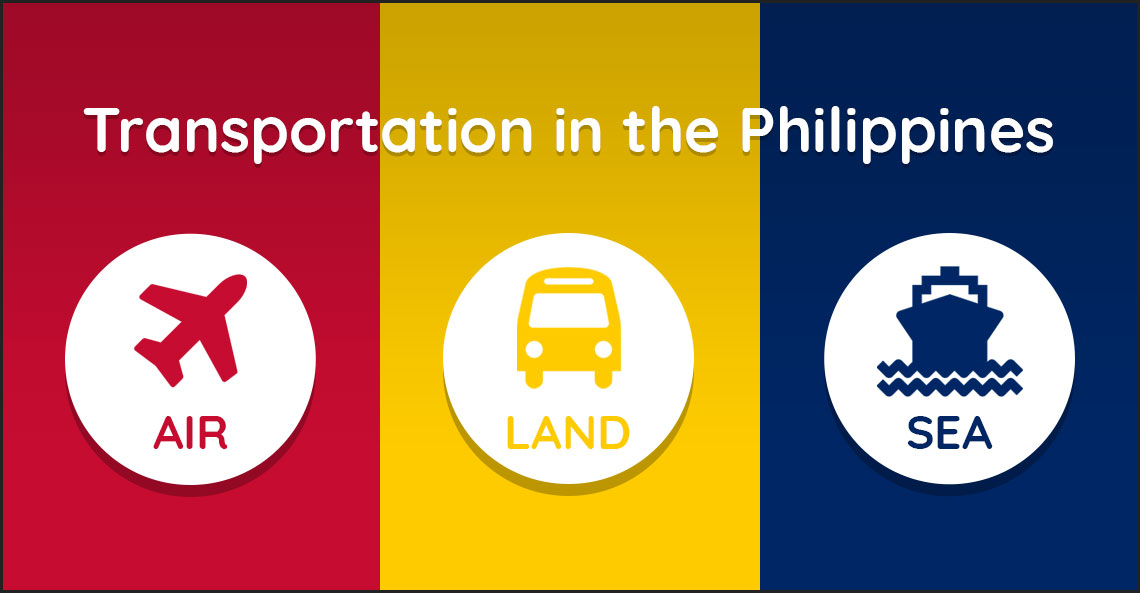 There are several ways to travel throughout the Philippines:  by air, by land, and by sea. This article identifies the various modes of transportation available in the Philippines.

The following are modes of transportation by air in the Philippines.

Exploring the Philippines by air is the easiest way to travel amongst the islands!

The Philippines’ domestic airlines fly across the country to connect major cities and hubs.

The Philippines is composed of several thousand islands; luckily, there are numerous budget airlines that fly between all major destinations, meaning travelling throughout the Philippine archipelago is actually really easy!

Traveling by plane is often the quickest form of travel between major destinations in the Philippines.

READ MORE:  FAQs about Air Travel in the Philippines

The following are modes of transportation by land in the Philippines.

Getting around by bus is fairly common in the Philippines, thus there are bus terminals in almost every city. You can even travel from Luzon to Visayas or Mindanao by bus through RoRo.

Buses are not used to get around most cities. More often, buses are used to get in the city from other towns and cities, and vice versa.

READ MORE:  Traveling by Bus in the Philippines

It won’t take too much effort to find a car for hire. Rate starts at 2,000 PHP ($40 USD) and can go higher depending on the type and model of the car. The cost comes with free fuel, professional driver, and insurance.

Renting a car and driving it yourself is possible … but not recommended.

To rent a self-drive car, one needs to have a valid driver’s license and ID. Some companies even ask for proof of billing and have a minimum age requirement. Most companies require full payment of rental and cash bond which is usually 5,000 PHP ($100 USD). For foreigners, a passport may be required. Rate starts at 1,500 PHP ($30 USD).

Sometimes called simply jeeps, are buses and the most popular and low-cost means of public transportation ubiquitous in the Philippines. They are known for their crowded seating and kitsch decorations, which have become a widespread symbol of Philippine culture and art.

Jeepneys are used when traveling outside the city limit. They have set routes so make sure to check out the route of the vehicle before getting into it. Fare ranges from 5 PHP ($ 0.1 USD) to 30 PHP ($0.6 USD) depending on the origin and destination.

READ MORE:  Traveling by Jeepney in the Philippines

Ride-sharing is available in a few of the larger cities but not common in most of the Philippines.  Uber was bought out by Grab in the Philippines and most of Asia.  Use the Grab App to book a ride share in Metro Manila, Cebu City, Davao City, Iloilo City, Bacolod City, and Baguio City.

Shuttles are typically used by hotels to transport their guests.

Trains in the Philippines are limited to the Metro Manila and surrounding area.

Trains are currently used mostly to transport passengers within Metro Manila and the nearby province of Laguna, as well as a commuter service in the Bicol Region.

The Philippine railway network consists of two commuter lines (LRT) provided by the Philippine National Railways (PNR) and three mass transit lines (MRT) operated by the Light Rail Transit Authority and Metro Rail Transit Corporation, all of which are located in Luzon.
“LRT” stands for “light rail transit” while “MRT” stands for “metro rail transit” or “mass rapid transit.” In the Philippines, the only differences between the two modes of transportation are the routes and the company that runs them. The LRT is smaller in length and slower than the MRT.

The tricycle is the main mode of transportation when getting around most of the Philippines. You can simply hail one just outside your hotel, restaurants, business establishments, and tourists attractions. Minimum fare for short distance rides is 10 ($.20 USD) per person.

Motorized tricycles, or simply tricycles, are an indigenous form of the auto rickshaw and are a common means of public and private transportation in the Philippines. These public utility vehicles either follow a set route or are for-hire like taxis.

Renting a motorcycle for a day or throughout your stay in the city can give you more freedom to go wherever you want at your own time. Motorcycle rental starts at 250 PHP ($5 USD) per day and can go higher depending on the model or type of motorcycle. Helmet and insurance are usually included. Most cities and municipalities have rental shops. Some rental companies deliver the unit to your hotel.

There are few businesses where you can rent a bicycle to get around the local city, town, or municipality and neighboring towns.

Ferries are the most common mode of transportation by sea in the Philippines.

There are 4 types of ferries in the Philippines: the Bangka, ROROs (Roll On, Roll Off ferries), Fastcrafts, and Passenger Liners.

Bangkas are also known as pump boats. Bangkas are glorified water taxis made of traditional building materials like wood and bamboo. They are surprisingly sturdy boats that can withstand rough seas to an extent. Bangkas are the cheapest form of ferry transport and most often used for short-distances.

Roll On Roll Off ferries are large ferries that are especially useful if you are traveling with a vehicle. You do not have to have a vehicle to use these vessels. These ferries are used for short to medium distances.

These fast, air-conditioned vessels provide transport between the larger islands of the Philippines. They provide faster travel and modern amenities and as a result have a higher ticket price.

Passenger Liners run long-distance routes around the islands. They transport hundreds of travelers similar to airplanes. Lower Deck bunk accommodation is available in the form of economy class tickets. With a first-class ticket, you can expect an air-conditioned stateroom. Traveling in the economy is fine as long as the ships aren’t too crowded.

READ MORE:  Traveling by Ferry in the Philippines