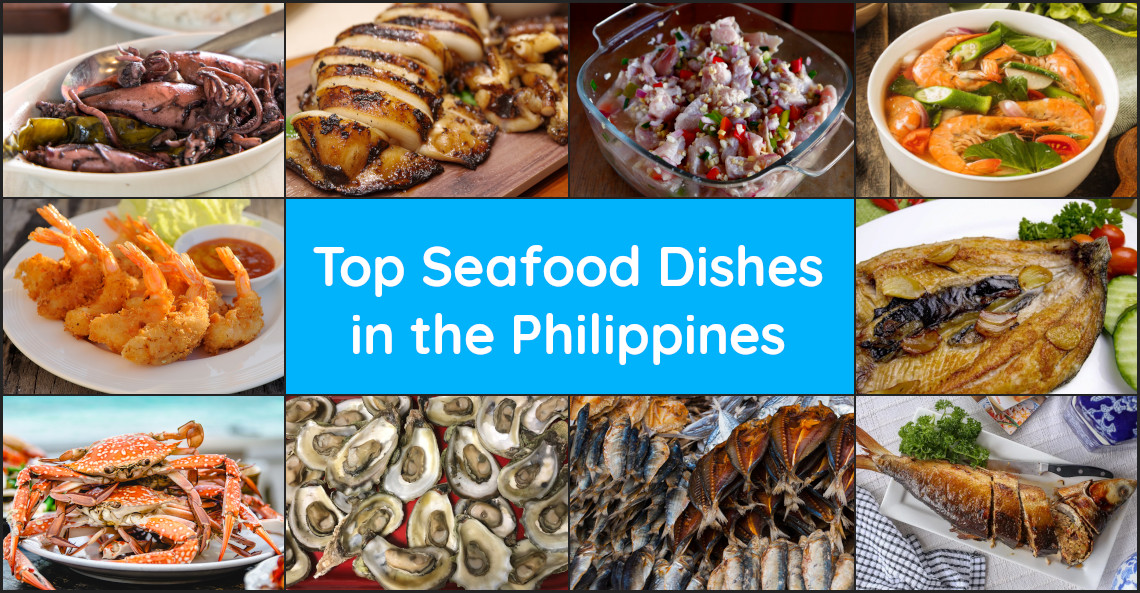 The Philippines is an archipelago of more than 7,000 islands.  Given the geographic features, the Philippines is recognized as one of the top seafood producing countries in the world.  Many Filipinos, especially those who reside near the coastal areas, earn a living by fishing.

You can indulge in the freshest seafood in almost every part of the country.  Be it as simple as steamed talaba (oysters) or as labor-intensive as rellenong bangus, you will surely find something to satisfy your seafood cravings.

Find out the top seafood dishes in the Philippines.

It’s dark brown or black appearance may be a turn-off to some but adobong pusit, or squid adobo, is actually a favorite seafood dish among Filipinos.  Like other adobo dishes, adobong pusit is cooked in vinegar and soy sauce until tender, hence the sour and salty flavor.

Aside from adobo, another well-loved squid dish is inihaw or grilled.  It is usually stuffed with chopped onions, garlic, and tomato for that juicy squid meat bursting with flavor.

The local version of the ceviche, kinilaw na isda is made with raw fish mixed with vinegar and typically garnished with onions, garlic, ginger, black pepper, and chili pepper to further enhance the flavor.  Other souring agents such as calamansi, green mangoes, tamarind, balimbing (star fruit), and kamias (bilimbi) can be used too.

Sinigang na hipon is a favorite local dish known for its sour and flavorful taste.  The dish also contains vegetables including okra, water spinach (kangkong), asparagus beans (sitaw), eggplant, radish, and taro corms (gabi).  To achieve that sourness the dish is known for, a local ingredient such as tamarind, guava, calamansi, kamias, santol, or batuan is added. Commercial sinigang flavors and seasoning are also used if such natural ingredients are not available.

Sinigang can also be cooked using pork or fish as the main ingredient.

Camaron rebosado is made of marinated shrimp dipped into a batter made of flour, black pepper, egg, water, and cornstarch or baking powder.  It is then deep-fried until golden.  The heads and tails of the shrimp are often removed and the marinade is a combination of calamansi or lemon juice, black pepper, salt, garlic, and other preferred spices.

Camaron rebosado is similar to Japanese tempura but with a thicker coating and is not chilled before frying.

Bangus, or milkfish, is the country’s national fish.  One popular way to cook it is by frying.  To do this, the bangus is split on the side by running a knife from the tail to the head.  The gills and innards are removed and then laid open before washing to remove blood.  If you do not want to go through the preparation, you can find cleaned bangus in most markets and groceries in the country.  You can also buy boneless bangus and marinated boneless bangus.

No fancy or elaborate preparations but steamed crabs is definitely a crowd favorite.  The Filipino way of doing it is actually called halabos wherein the crabs are cooked using very little water.

Steamed oysters (locally called talaba)… just the thought of it can make some people drool.  In the Philippines, you can find several talabahan, a stall or eatery specifically serving steamed and baked oysters.  The steamed oyster is often dipped into a mixture of calamansi, soy sauce, and spiced vinegar.

When you visit the public markets in the Philippines, be prepared to see a long section specifically selling various kinds of dried fish and seafood.  These fishes are usually split open, salted, and then sun-dried or air-dried.  It is typically cooked by frying or grilling but it is sometimes used to add flavor to tinola (vegetable soup), ginisang monggo, and a few other dishes.

While it is a delicious bangus dish, it’s not everyday one can eat rellenong bangus (stuffed bangus) because of the process it takes to prepare it – separating the skin from the meat, deboning, cooking the meat along with other ingredients, stuffing the fish meat mixture back to the skin, and frying.  But the effort is all worth it as the dish is so tasty.