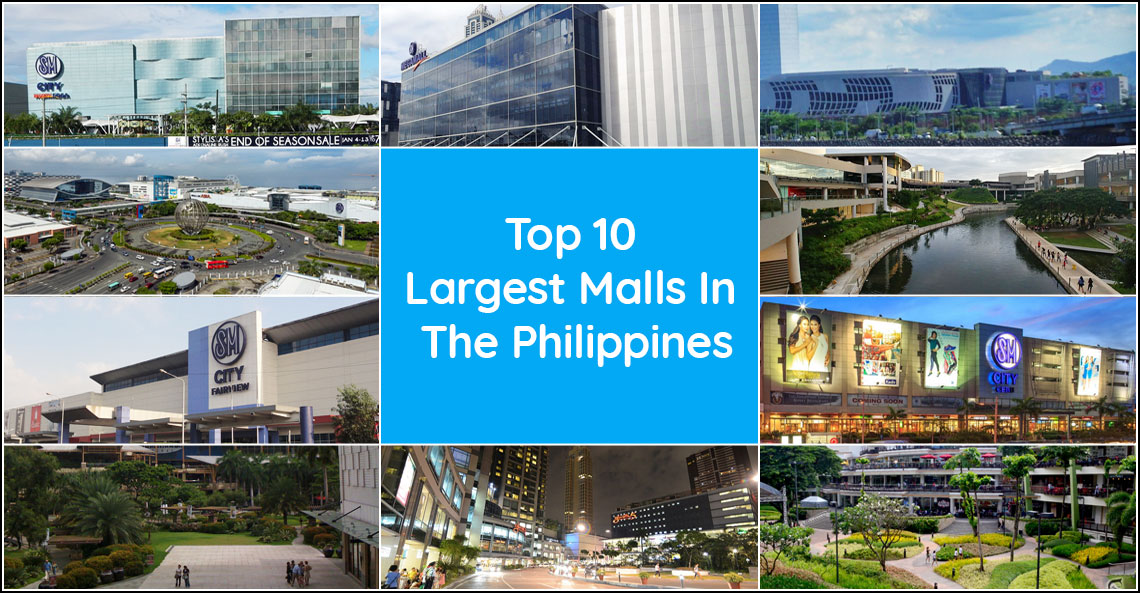 A List of the Top 10 Largest Malls in the Philippines

Details about each of the 10 largest malls in the Philippines

What makes this mall unique is its two-story entertainment complex, most of which is open-air facing Manila Bay. It also houses the first-ever IMAX Theater in the country, the San Miguel Coca-Cola IMAX Theater which happens to be one of the world’s biggest IMAX screens.

SM City North EDSA opened in 1985, months before the EDSA Revolution which is a challenging period in the political history of the Philippines. Nevertheless, it has become the largest shopping mall in the Philippines and the eighth largest in the world, presently.

Originally has a floor area of 120,000 square meters, the country’s first SM Supermall went through several expansions and renovations to add more parking space, retail space, office & services space, restaurants, and entertainment venues such as movie houses, bowling alley, and game arcade. Aside from the City Center which is the main building, the mall complex is comprised of buildings and towers namely Interior Zone, The Annex, The Block, The Sky Garden, The Northlink, and The North Towers – all are interconnected by footbridges.

For 17 years, SM Megamall holds the title as the largest mall in the country until it was surpassed by SM City North EDSA. The mall has two main buildings and three additional buildings namely Mega Atrium, Building C, and Mega Fashion Hall. In 1992, the mall opened the country’s first-ever skating rink but was removed in 2009 only to be rebuilt in 2014 into an Olympic-sized ice skating rink.

The mall houses a passport office of the Department of Foreign Affairs, an IMAX Digital theater, and several global brands. It has a capacity of four million people and 4,200 vehicles.

SM Seaside City Cebu is the third largest shopping mall in the Philippines and tenth in the world. It is a circular-shaped structure overlooking the sea. The mall which opened in 2015 boasts of a Centerstage theater, a Large Screen format cinema and two Director’s Club cinemas in addition to four regular cinemas. Patrons will also enjoy the 18-lane SM Bowling and Amusement Center as well as the Olympic-sized ice skating rink.

The mall is continuously upgraded and will soon open the SMX Convention Center Cebu and Seaside Tower which has a viewing deck providing everyone a 360-degree view of Cebu City.

An expansion in 2014 gave way to the construction of the River Park and opened an expansion wing called the Water Garden in 2017.

The SM City Fairview is the sixth largest mall in the country is part of SM mall triplets, the company’s concept of building three shopping malls with the same design in three different areas. The two other malls having the same facade and interior with SM City Fairview are SM Bacoor and SM City Iloilo.

SM City Fairview houses 12 cinemas that can accommodate more than 8,000 people and will soon open the Director’s Club and Mega Screen Cinema. The mall also boasts of its 20-lane bowling center and more than 600 shops and restaurants for everyone’s entertainment and shopping convenience.

The last SM mall to make it to the list is SM City Cebu. This seventh largest mall in the Philippines is SM Prime Holdings’ first shopping mall outside Metro Manila.

Attracting more than 100,000 people every day, the mall is a seven-level complex that houses eight cinemas, a fully-computerized bowling center, an amusement center, and a trade hall.

For global designer brands, Greenbelt is the place to be. This eighth largest shopping mall in the country is comprised of five buildings, each having its own style and features. Aside from high-end retail shops, the mall houses more than 300 stalls comprising of restaurants, services, leisure, and entertainment.

A chapel at the heart of the complex holds masses every day.

Not too far away from Greenbelt lies Glorietta, another mall owned by Ayala Land. Just like its sister mall, Glorietta is divided into five sections named Glorietta 1 – 5. The complex houses more than 400 shops comprised of local and international brands, restaurants, cinemas, and entertainment. A hotel, BPO offices, and condos also stand within the complex.

The beautifully-landscaped Ayala Center Cebu is the tenth biggest mall in the Philippines with a total retail area of 245,000 square miles. The mall lies in the heart of Cebu Business Park Complex and accommodates approximately 100,000 people every day. Ayala Center Cebu has everything you need – shopping, dining, and entertainment.

It’s also important to note that SM Megamall, SM City North EDSA, and Mall of Asia are included in the top 10 largest malls in the world!

READ MORE:  A Complete List of Malls in the Philippines