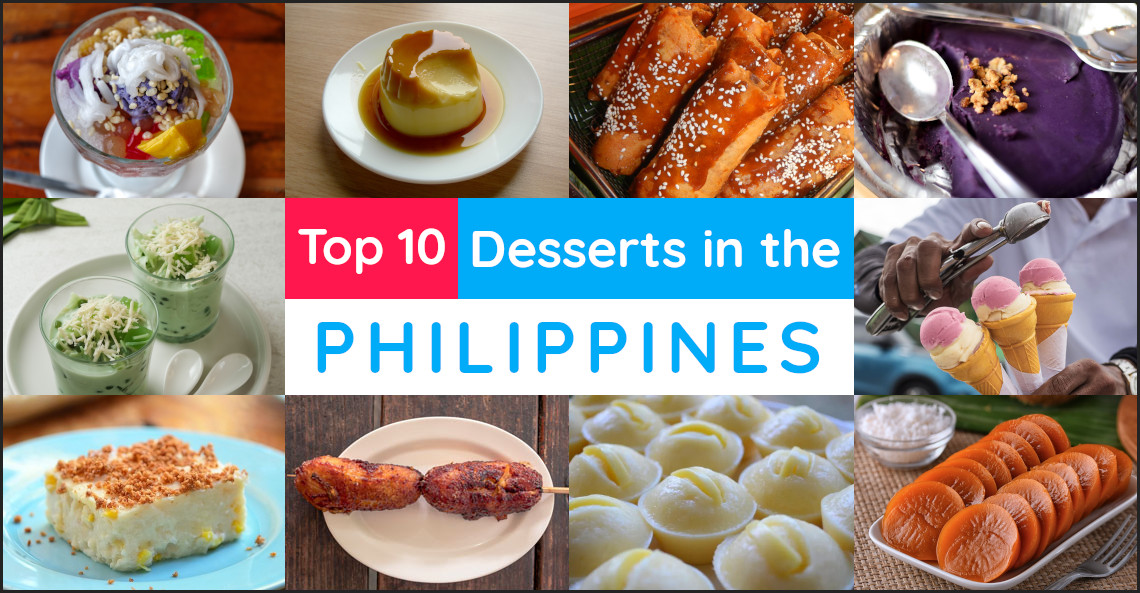 Flipinos love their desserts as much as they love their delectable dishes such as adobo, lechon, or sinigang.  Like other foods, desserts are a serious business in every Filipino gathering.  Every event, regardless how small, always has a dessert or two for everyone to take pleasure in.

Considering the abundance of coconuts in the Philippines, it is not surprising that several of the desserts contain coconut.

Here are the ten desserts you will more likely see when invited to attend a gathering in the Philippines, or  with Filipinos anywhere in the world.

Halo-halo is so popular that you won’t have a hard time finding where to eat it.  From street food stalls and food chains to fancy restaurants serving Filipino cuisine, halo-halo is surely a part of their offerings.

The local version of caramel pudding, the Filipino’s leche flan is distinct for its sweet and rich taste.  The yummy dessert is a combination of milk, sugar, and egg yolks steamed for 30 to 40 minutes or until formed.  It is coated with melted sugar and best served when chilled.

Turon is a famous Filipino food made of banana wrapped in spring roll wrapper and deep fried until crispy.  It is then coated with caramelized brown sugar and sometimes sprinkled with sesame seeds.  Aside from just plain bananas, other versions of turon include banana with jackfruit and sticky rice with jackfruit.  SM Supermarkets are known all over the country for selling large turon but it is also sold by food vendors in the streets.

Ube, or purple yam, is a tuber with a distinct bright purple color.  It is widely used in the country for cakes, candies, ice cream, and pastries but it is most known in ube halaya, a dessert made by mashing the boiled ube and then placed in a saucepan along with condensed milk, coconut milk, and butter.  It is cooked over low fire and continuously stirred until thick.  Ube halaya is best served cold.

Buko Pandan is typically seen in parties and gatherings.  It is made of pandan-flavored gelatin, shredded young coconut, cream, and condensed milk.  Sometimes more ingredients such as cheese, sago or tapioca, nata, and corn kernels are added to the mix.  It is then refrigerated and served cold.

Pandan is a tropical plant known for its fragrant leaves and is used in other dishes and desserts such as pandan chicken and pandan cake.

Dubbed as “dirty ice cream”, sorbetes is one of the best parts of every children’s party.  This Filipino ice cream is typically made of a combination of coconut milk or powdered milk and cassava flour.  It comes in several flavors including cheese, chocolate, mango, and ube but some creative ice cream makers have come up with unique and interesting flavors such as durian, malunggay, ginger, and even chili.  It is sold from a stainless steel barrel placed inside colorful wooden carts filled with rock salt and ice.  It is peddled around the neighborhood or you can order a barrel for your event.  Dirty ice cream is not actually dirty, it is named as such to differentiate it from store-bought ice cream.

Like turon, banana cue is made of deep fried banana and coated with caramelized brown sugar but without the spring roll wrapper.  It is served on skewers and sometimes sprinkled with sesame seeds.  It is a popular street food in the Philippines and it is sold all over the country.

Maja Blanca is a pudding made of coconut milk, cornstarch, and sugar.  The mixture is cooked over low fire and continuously stirred until thick and eventually forms into gelatin when cooled.  Maja Blanca is known for its creamy and soft texture and delectable milky flavor.  Some versions include sweet corn kernels, tapioca, and young coconut strips.

Puto is popular not only as a snack or breakfast food, it is eaten as dessert, too.  Puto is a steamed rice cake made of milled plain rice, sugar, and coconut milk.  The mixture is placed into a molder, either or not lined with banana leaves, and is steamed until it becomes firm to the touch.  Aside from the classic version, it now comes in a range of flavors including cheese, pandan, ube, and even used to create a hybrid leche flan called puto flan.

Rice is more than just a staple food in every Filipinos’ dining table.  It is also used to cook snacks and desserts like puto and kutsinta, a steamed rice cake known for its brown color with sticky and slightly rubbery texture.  It is often topped with grated coconut or cheese.