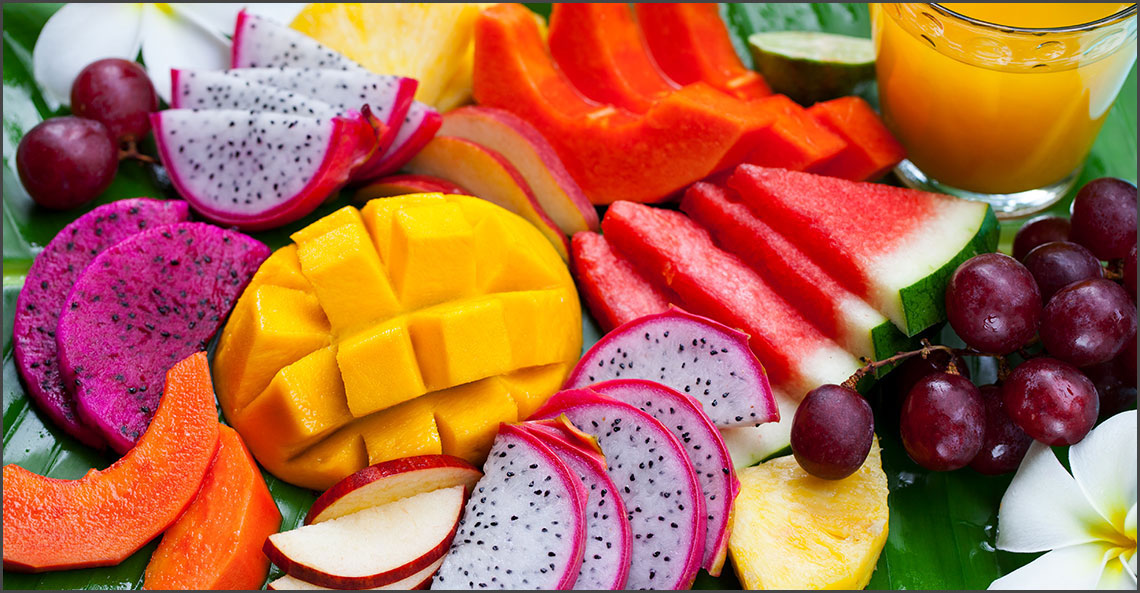 As a tropical country, the Philippines boasts of different kinds of tropical fruits that vary in taste, shape, color, and size. Some of these fruits grow all year round while some are seasonal. Get to know them here!

The coconut is more than just a symbol of beaches or summer. Every island in the Philippines has coconuts and it bears fruit all year round. Its juice is refreshingly cool and its meat tastes good. The coconut is used not only for culinary but also for cosmetics, medicine, ropes, mats, and even fuel.

Like coconuts, bananas grow all year round. In fact, the Philippines is the top 3 leading exporter of bananas in the world. There are more than 5 varieties of bananas in the country with lakatan, latundan, saba, and cavendish being the most popular.

In Season:  November – May

Mango is the country’s national fruit. They usually bear fruit during dry season which is from November to May. The island of Guimaras in Western Visayas is the mango capital of the Philippines and is known to produce one of the sweetest mangoes in the world.

Pineapples may not grow everywhere in the Philippines, but the country remains to be one of the top exporters of this fruit. They’re in season from May to July. Aside from food, pineapples are also used in textile industry.

Papayas bear fruit all year round. When ripe, they’re eaten raw and used in culinary when unripe.

Mangosteen is popular not just for its delectable sweet sour taste but also for its high nutritional value. It’s even made into a food supplement that can be readily-taken through capsules and juice.

Locally called langka, jackfruits contain several large seeds and flesh. When ripe, the flesh is eaten raw and mixed in turon (native snack) and halo halo (cold dessert). When unripe, it is being used to some Filipino dishes such as KBL which stands for kadyos, baboy, langka (pigeon peas, pork, jackfruit).

Due to its high water content, the cold watermelon is a great thirst-quencher during hot summer days. This large fruit has a thick rind and fleshy center with several black seeds. In the Philippines, varieties can be red or yellow. The latter being sweeter of the two.

Also known as calamondin or Philippine lime, the calamansi is primarily used in beverages and condiments, marinades, and preserves. This citrus fruit may have a sour taste but has high Vitamin C content.

Durian may not be a favorite fruit among several Filipinos due to its strong odor but they surprisingly taste good. Its yellow flesh is eaten raw and made into candies.

This fruit that resembles a star when cut in cross-section is usually eaten raw and made into preserves, relishes, and juice drinks. With less than 4% sugar content, carambolas are tarty and sour.

In Season: May – September

Aside from its flavorful taste, avocado is known for having high healthy fat (monounsaturated fat) content. It’s a well-loved food in vegetarian cuisine and is often used for salads, dips, milkshakes, ice creams, and other desserts.

Think of lychee but with fleshy spines! Its flesh has a sweet and mildly acidic taste. Rambutan is in season from August to October.

In Season: May – August

Lychees grow in select areas in the Philippines due to its climate requirements which is around 15-19°C. Its translucent white flesh has floral smell and sweet flavor.

This fruit is often likened to a kiwi because of its black and crunchy seed with nutty taste. Its flesh, can be white, red or purple, is mildly sweet. Dragon fruit is used in juices and alcoholic beverages while the flowers can be eaten or made into tea.

There’s no waste when you buy a kiwi because the whole fruit is edible – from its light-brown skin up to its black seeds. Its flesh, which is either light green or golden flesh tastes refreshingly sweet and unique. Not only it can be eaten raw, kiwi is also made into juices, used in pastries, or as a garnish and prepared with meat.

Commonly used in juices, passion fruit is a type of berry with numerous seeds. It has a sweet and juicy interior which can be eaten raw.

In the Philippines, the two most popular varieties of melons are cantaloupe and honeydew. Their sweet and edible flesh are often used in salads and even juices. There’s an abundant supply of melons in the Philippines from April to July.

The outer appearance of this fruit resembles peaches but it is divided into sections. Each section has a seed covered in edible pulp that looks like cotton. Some varieties are sour thus eaten with soy sauce and salt.

Guava is a round fruit with white or deep pink pulp that is often sweet when mature but bitter when unripe. The tiny seeds, found in the core, are hard thus they’re always left uneaten. Guavas tend to have strong smell when overripe.

There are different kinds of citrus fruits in the Philippines with calamansi as the most common. Other citrus fruits native to the country are dalanghita (has green rind but bigger than calamansi) and dayap (key lime). Oranges, tangerines, lemon, and pomelo are also popular.

In Season: April, March, and May

Strawberries may not be grown all over the Philippines due to its climate requirement which is colder, but you can easily find this fruit in the groceries nationwide. La Trinidad Strawberry Farm in Benguet offer strawberry picking activity to tourists.

Black plums, also called Java Plum and locally known as duhat, are oblong-shaped and resemble large berries. The unripe fruit is green and becomes crimson to black when ripe. The fruit has a combination of sweet and mildly sour taste.

In Season: February – May

Cashews are usually grown in Palawan and Ilocos region hence cashew nuts are one of their top products. Nuts are sold roasted and often used for cakes, ice creams, candies, chocolate, and other desserts. The fruit is also used to make wine and vinegar.

Lanzones looks like potatoes but smaller in size. The fruit has clusters and has seeds covered in thick flesh that tastes a combination of sweet and sour. The main source of lanzones in the Philippines is the island province of Camiguin. The fruit is in season during the months of March, April, and October.

Locally known as chico, sapodilla is a brown fruit with brown and soft flesh which is quite grainy. The fruit tastes deliciously sweet though.

Referred to as atis by the locals, the sugar apple is round-shaped, has green knobby skin, and creamy white flesh. It has a custard-like flavor and eaten when ripe.

The tamarind fruit comes in pods with hard, brown shells. Each pod contains a glossy brown shell covered in edible pulp that is green and tastes sour when unripe. When ripe, the pulp turns brown and the taste is less sour. The fruit is popularly made into candies and also used in stew.

Elderberry is popularly used as a dietary supplement in the form of capsule, tea or juice.

Kamias is an elongated fruit with light green skin that turns yellow green when ripe. Its flesh, which is white and crispy, is extremely sour hence typically eaten with salt. It’s commonly used in favorite local dishes like sinigang and paksiw.

In Season: March – May, September, and December

Grapes are not widely grown in the Philippines but the white variety can adapt well to local climate. Grape plantations are found in Cebu, Ilocos Region, South Cotabato, and Zamboanga as well as Iloilo and Antique.

Locally known as guyabano, soursop is commonly grown in backyards. The fruit has green and prickly skin while its edible flesh is white, soft, and juicy. The fruit is known to have high content of vitamin C, B1 and B2 hence it is being made into dietary supplement in the form of juice, capsule, powder, and tea.

A great source of vitamin C, gooseberries can be eaten as is or made into pies, fruit wines and teas as well as used to flavor sodas, milk, and even water.

In Season: October – May

The fruit comes in a pod which is green when unripe and turns pink when ripe. Inside the pod are black shiny seeds covered in either white or pink edible pulp. The pulp is eaten raw and is a well-loved fruit among diabetics as it is said to help manage the disease.

This slightly elongated fruit is green when unripe and turns purple or red when ripe. Its thin skin, which is edible, covers the yellow pulp that tastes sweet when ripe. The large pit in the center is not edible.

This bell-shaped fruit varies in color – white, green, red, purple, and crimson. Its skin is thin and its white pulp is spongy. Both are edible and tastes like snow pear.

Also known as caimito, the fruit is known for its milky pulp that tastes really good when served chilled. When cut crosswise, the fruit displays a star pattern thus the name.

Sometimes mistaken as durian or jackfruit, the fruit of marang is smaller than jackfruit and not as intense-smelling as durian. Its white pulp tastes mildly creamy, reminiscent of juicy banana. This fruit is abundant in Palawan and Mindanao.

The tree produces a glossy fruit with pulp that which could be pasty, creamy or mousse-like depending on the variety. It is eaten fresh but can also be made into jam, marmalade, pancakes, shake, and puree.