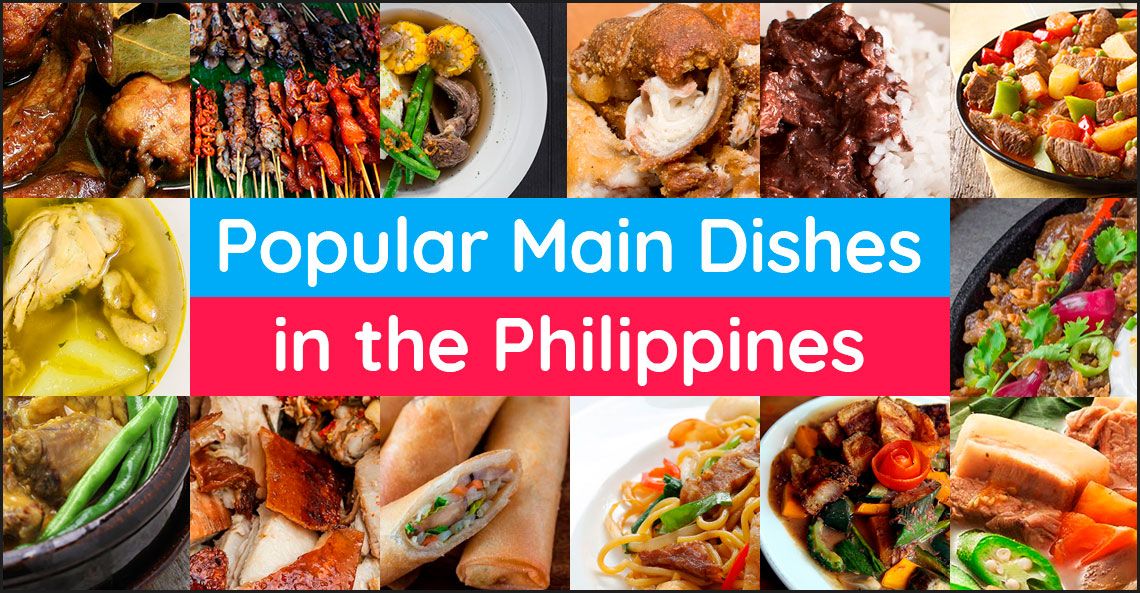 The main dishes in the Philippines range from simple barbecue to complex dinuguan and time-consuming lechon.  The dishes originated from various regions and ethno-linguistic groups from different parts of the country but several of these dishes have become popular nationwide and recreated based on local traditions and available resources.  Now you know why there’s Vigan longganisa, Lucban longganisa, longganisa de Cebu, and others.

While there are probably over a hundred main dishes in the Philippines, we are listing the most popular ones, those that you are more likely to come across with when dining in one of the restaurants in the country.

Filipinos love their adobo so expect to see it on the menu of almost every Filipino restaurant and even small eateries all over the country.  Every region has its own version but generally, it is made of chicken or pork, or both, stewed with vinegar, soy sauce, pepper, and herbs for modern twists or achuete (annatto seeds) in some versions.  Another adobo version uses asparagus beans (sitaw) as the main ingredient.  Adobong sitaw calls for diced pork and some even uses shrimp paste (bagoong).

You can find barbecue almost everywhere in the Philippines.  To cook barbecue Filipino style, the meat is marinated in a mixture of calamansi, salt, pepper, and garlic, then grilled over hot coals while basted with annatto seeds (achuete) oil. In addition to pork and chicken, offal like intestines (isaw), liver, and blood are used as well.

Bulalo is a soup dish made of beef shanks and bone marrow slow cooked in water, fish sauce, onions, and peppercorns, and later on added with vegetables such as pechay or cabbage and corn on the cob.  Potatoes or carrots can also be added.  Like most main dishes in the country, bulalo is often eaten with rice.

The mouth-watering crispy pata is made of pig trotter (culinary term for pig foot) or knuckles boiled and deep fried to perfection.  It is often served with a dipping sauce which is commonly a mixture of soy sauce, vinegar, calamansi, and chili.

Derived from the root word dugo which means blood in Filipino, dinuguan is a dish made of bite-sized pork offal (lungs, kidneys, intestines, ears, heart, snout) and meat cooked in a mixture of pig’s blood, garlic, vinegar, and chili.  One version contains chopped squash and another version contains chopped jackfruit.  There are also versions which use chicken or goat offal instead of pork.  Dinuguan is commonly eaten with steamed rice or puto (steamed rice cake) and is available not only in big restaurants but in small eateries as well.

Kaldereta is a stew commonly made of goat meat although beef, pork, and chicken can be used as well.  The meat is stewed with tomato sauce and liver paste, and later on added with vegetables including potatoes, bell peppers, carrots, and carrots.

Kare-kare is known for its distinct savory sauce made of crushed peanuts and toasted ground rice.  The main ingredient of the dish is oxtail and sometimes tripe.  It also contains vegetables including eggplant, asparagus beans, banana blossoms, and Chinese cabbage.  Onions and garlic add flavor to the dish and colored by annatto seeds (achuete).  Kare-kare is eaten with steamed rice and shrimp paste (bagoong).

A whole roasted pig, locally called lechon, on the table is a common sight during birthdays, weddings, annual fiestas, reunions, and many other occasions.  To cook lechon, a whole suckling pig is skewered on a bamboo pole that is placed over the charcoal and cooked for several hours in a rotisserie fashion.  Cebu is known to have the country’s best lechon.

Lumpia is a popular dish found in almost every Filipino celebration, hence also a favorite subject of memes about foods. It is actually a spring roll wherein a thin pastry skin called lumpia wrapper is filled with sauteed minced meat and chopped vegetables such as carrots, cabbage, and bean sprout.  Lumpia has two other versions called lumpiang shanghai and fresh lumpia.  Lumpiang shanghai uses ground pork and minced carrots only while fresh lumpia uses tofu, potato, and sometimes sweet potato in addition to pork and carrots.  Fresh lumpia isn’t fried but is equally delicious.

Introduced by Chinese in the early days, pancit is one of the most popular foods in Filipino cuisine.  It’s main ingredient is noodles and mixed with vegetables and chicken or pork.  It comes in several variations but the most popular variations are pancit luglug, pancit palabok, and pancit bihon.  These variations are cooked almost the same way but varies in the noodles used.

Pinakbet is a vegetable dish originating from the Ilocos Region.  It usually contains eggplant, bittermelon, okra, asparagus beans, chili peppers, winged beans, and squash.  Onions and garlic are being used along with shrimp paste (bagoong) to enhance the flavors.

Sinigang can be made of pork, shrimp, or fish along with vegetables including okra, water spinach (kangkong), asparagus beans (sitaw), eggplant, radish and taro corms (gabi).  Tamarind, guava, calamansi, kamias, santol, or batuan is added to give the dish sourness which it is known for.

A Kapampangan cuisine, sisig is made of parts of a pig’s head that is grilled or broiled and mixed with eggs, pork cracklings, and pork or chicken liver.  It is then seasoned with calamansi and chili, and topped with chopped onions.  A festival called Sisig Fiesta is held every year in Pampanga to celebrate the dish.

Feeling under the weather? A bowl of hot tinolang manok may help make you feel better.  A popular Pinoy comfort food, tinolang manok or chicken tinola is cooked by sautéing sliced chicken with garlic and onion, and then simmering it in chicken stock until the meat is tender.  Sliced green papaya and leaves of chili or malunggay are added.  Some regions use lemongrass to enhance the flavor of the dish.

Pinoys love these main dishes so it’s not surprising when they are present during celebrations and special occasions apart from being available in several restaurants in the Philippines.