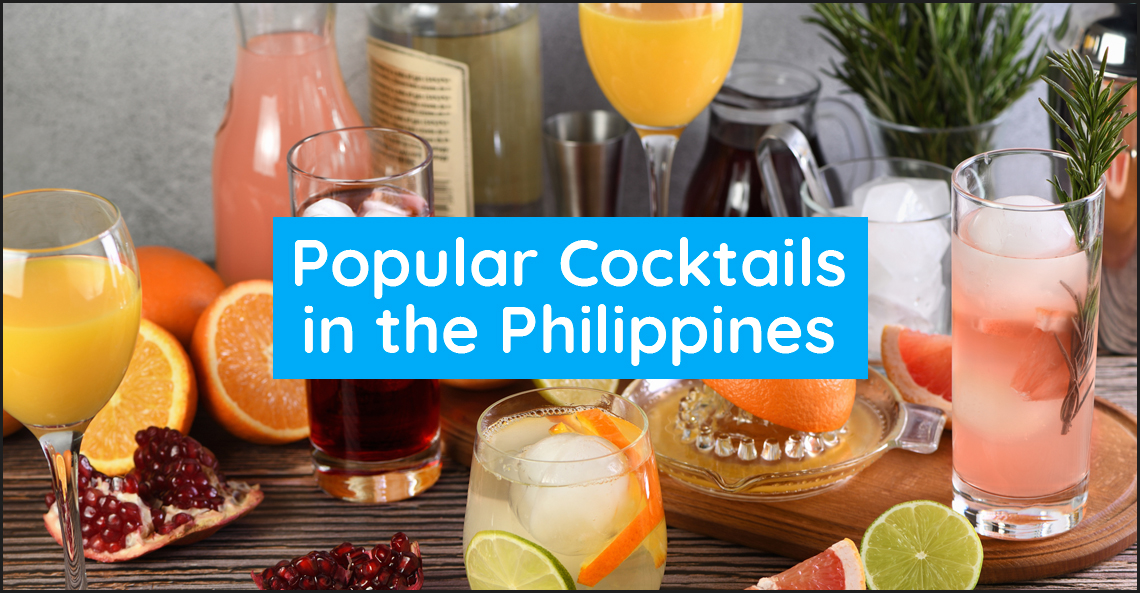 The liquor scene in the Philippines is an interesting mix of traditional drinks such as lambanog, basi, and tapuy to mainstream drinks such as San Miguel Beer and Red Horse Beer.  Cocktails, on the other hand, may not be as popular as those beers due to cost and availability but they have become popular especially among younger generations for their unique combination of flavors and kick.

Many of these cocktails can be easily ordered in bars in the Philippines but with the right ingredients, they can also be made at home even without expensive tools or mad bartending skills.

Here are the cocktails popular in the Philippines.

This is probably the most popular and affordable of all cocktails in the Philippines.  Gin Pom, short for gin pomelo, is a combination of a bottle of gin, powdered pomelo juice, water, and ice.  Fresh pomelo can also be used for that authentic pomelo taste.

The cocktail became a hit in the 90’s that a song was composed in its honor, although its lyrics is but a repeated “gin pomelo”.

Looking for something more potent?  Mestiza may be right for you.  It contains only three ingredients; rum, beer, and soda.  You can try out different brands of beer or variations of soda to get your desired flavor.  Whether you use Coke, Sprite, Pepsi, or 7 Up, as long as you are using good quality rum and beer, your mixture will never go wrong.

If you love to start your day with a cup of coffee, perhaps you may want to cap it off with a cup of coffee also… infused with a shot of rum that is.  Kagatan, from the root word “kagat” which means “bite”, is made of rum, condensed milk, and coffee.  The Filipino version of Affogato, Kagatan is perfect for those who love a cream-based cocktail with bitter taste.

Expired is mostly made of Red Horse, a local beer, with one part gin and menthol candies which fizzle when dropped into the beer and gin mixture.

“Punyeta” is a Filipino curse word used the same way words such as “damn”, “darn”, or “fuck” are used.  It is most likely the reaction this cocktail creates either due to its potency or the hangover that comes after.  Punyeta is made of rum (particularly Tanduay) and pineapple juice with a little bit of iced tea powder.

This cocktail was invented in Boracay, one of the most popular tourist attractions in the Philippines.  The local version of Baileys, the drink is made with Tanduay or Emperador, instant coffee, condensed milk, and chocolate malt powder.  This cocktail has the same ingredients as Kagatan.

Weng Weng, the most potent of all, contains not only one or two spirits but five – gin, vodka, rum, tequila, and brandy.  The concoction also contains grenadine syrup, orange juice, and apple juice.

Have you tried any of these cocktails?  If not, which one are you going to try first?

READ MORE: Local Drinks to Try in the Philippines