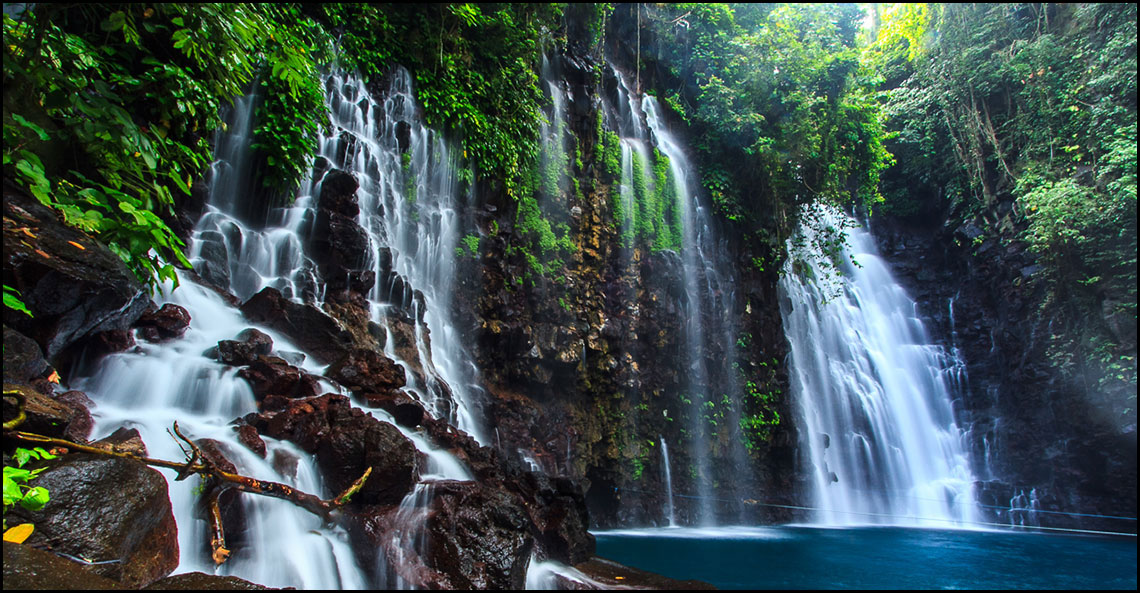 The Philippines is known as a go-to place for people seeking to explore magnificent natural resources particularly beaches. But there is more to the country than these white-sand beaches with crystal clear water. Mountains with breathtaking views are also plenty. So are waterfalls!

Below we’ve listed the top 10 most popular waterfalls in the Philippines. Let’s go chase them!

Also called the twin falls because of a rock at the brink of the waterfall that separates the flow of the water, Maria Cristina Falls is the second-highest waterfall in the country. This natural creation is not just pleasing to the eye, it also serves as the primary source of electric power for the city.

Another landmark in Iligan City, Tinago Falls is one of the most scenic in the city. Its multiple cascades fall into a basin-like pool hidden in a lush jungle, hence the name as “tinago”, a local word for hidden. Tinago Falls is so mesmerizing you might wonder if it’s for real.

If there is only one word to describe Limunsudan Falls, it would be grand! It is the tallest two-tiered waterfall in the country, with its two drops having almost the same height. It is located in a remote area that requires a 3 to 4-hour ride on dirt roads. To anyone who wants to visit the falls, make it a point to ask permission from the Higaonon Tribe of Bukidnon.

It may not be as tall as several other waterfalls in the country, but Tinuy-an Falls is the widest measuring 95 meters. It is even nicknamed the “Little Niagara Falls of the Philippines” because of its curtain-type appearance. It is also amazing to know that a rainbow appears in the area almost every morning between 9:00 AM to 11:00 AM.

If Tinago Falls is mesmerizing, Asik-Asik Falls is unique and probably mysterious as there is no evident source of water from above the wall or elsewhere. Instead, the frothy water sprouts from a wall covered by lush vegetation. The waterfall’s source is actually a subterranean river (a river under the earth’s surface).

Aliwagwag Falls consists of over 120 small cascades totaling to more than 1,000 feet, therefore, making it the tallest waterfall in the country. While it’s lovely to see all the drops, seeing only a handful would be enough as one is just as awesome as the others.

Alalum is derived from the local word “madalum” which means deep, in reference to its deep circular catch basin. Alalum Falls is a single layer waterfall that is about 45 meters in height. It is located beside a gorge along the highway hence the easiest falls to access.

It may be tucked away in a tropical forest, but Kawasan Falls can get crowded especially during summer. It consists of three levels; with the last level having the biggest stream and wherein guests can access using bamboo rafts.

As the name implies, Seven Falls consists of seven waterfalls, with the first one “Hikong Alo” as the easiest to access but swimming is prohibited. The second falls, named “Hikong Bente”, measures 70 feet in height and houses a 180-meter high zipline which claimed to be the highest and longest zipline in Southeast Asia. The rest of the falls are not accessible to the public but can be seen while on the zip line.

Have you been to any of these waterfalls? What do you think is the most beautiful waterfall(s) in the Philippines? Feel free to share your thoughts, experiences, and suggestions in the comment section below.