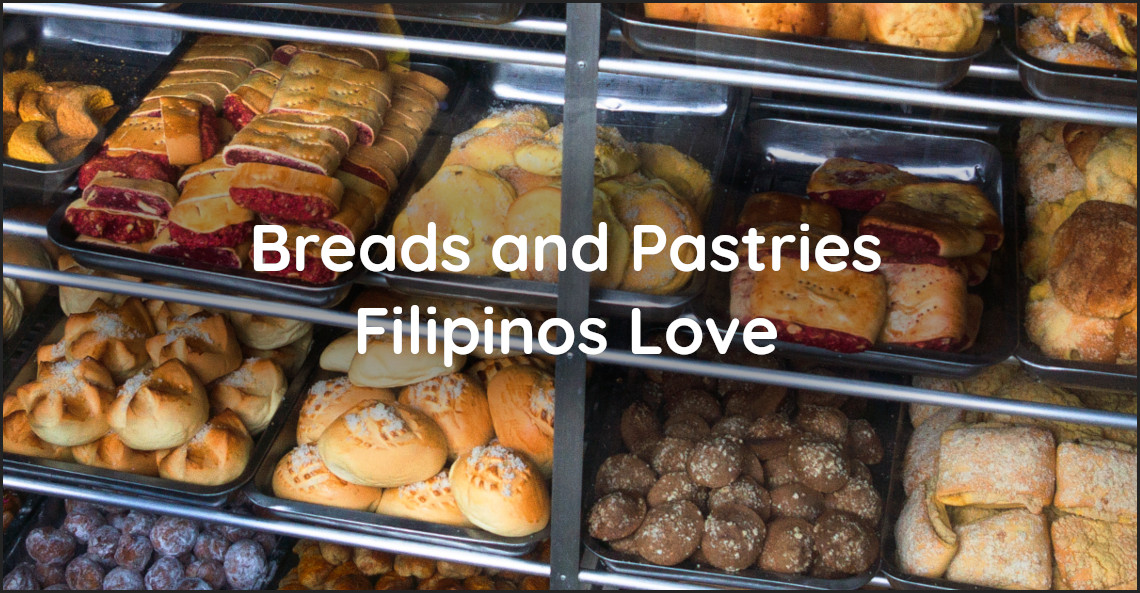 Flipinos love their desserts as much as they love their delectable dishes such as adobo, lechon, or sinigang.  Like other foods, desserts are a serious business in every Filipino gathering.  Every event, regardless how small, always has a dessert or two for everyone to take pleasure in.

Considering the abundance of coconuts in the Philippines, it is not surprising that several of the desserts contain coconut.

Here are the ten desserts you will more likely see when invited to attend a gathering in the Philippines, or  with Filipinos anywhere in the world.

Here are the 10 breads and pastries popular in the Philippines

The most popular bread in the country, pandesal is a soft and chewy bread covered in dust-like crumbs.  The bread is available in every bakery in the country and many people head to the bakery at the crack of dawn to buy newly-cooked pandesal as it tastes better when still warm.  It is often paired and dunked in a coffee although it can be eaten on its own or sliced into half and filled with mayonnaise, mango jam, cheese spread, or other bread spreads available.  In recent years, bakeries came up with other versions such as cheese pandesal, malunggay (moringa) pandesal, and ube pandesal.

The Filipino version of brioche, ensaymada is a sweet bread known for its soft cake-like texture topped with grated cheese and sugar.  Like pandesal, it is available in most local bakeries.  Some hotels and higher end bakeries even came up with upgrades like with buttercream topping or filled with ham, purple yam, or macapuno, a coconut variety.

Unlike pandesal and ensaymada, monay is heavy, solid, and is a bit hard on the outside but soft and chewy inside.  It has that distinct round shape with a suggestive marking on top.  It is originally named pan de monja which means cloistered nun’s bread but evolved into monay which is a colloquial term for a woman’s privates.

As the name implies, pan de coco is a medium-sized round bread filled with shredded coconut.  It is plump, its top is golden brown, and is highly addicting.

Another coconut delight, buko pie is a baked pastry filled with sweet young coconut meat sweetened with condensed milk.  Its pastry is a bit flaky and now comes with other variations such as macapuno pie, egg pie, and pineapple pie.  This pastry is said to have originated in Laguna and is now a specialty in the province.

Hopia is a bean-filled pastry with a flaky crust.  Its typical shape is round but it also comes in a semicircle.  The most common filling is sweet mung bean paste (hopiang munggo) but other variations include pork and onions (hopiang baboy), purple yam paste (hopiang ube), and azuki beans (hopiang hapon).

Mamon is a mini chiffon or sponge cake shaped like a cupcake.  Its top is slathered in melted butter and sprinkled with grated cheese and sugar.  In the Visayas, their version is denser and greasier in texture.  Mamon comes in different variants which include mamon tostado, puto mamon, pianono, and taisan, a loaf-like version of mamon.

Pianono is a rolled version of mamon and is usually sold as cake rolls.  It resembles a Swiss roll but is smaller in diameter.  It has a soft texture and has margarine and sugar filling.

Putok is made of the same ingredients with that of monay but is denser and harder.  It has a crown on top that resembles a star hence the other name which is star bread.  Its top is golden brown and is brushed with milk glaze and sprinkled with sugar.

Cheese bread is a smoother version of pandesal.  It is soft and denser.  This round-shaped bread is coated with cheese granules as opposed to dust-like crumbs in pandesal.

Other breads and pastries popular in the Philippines are empanada, siopao, kababayan, pinagong, and egg pie.