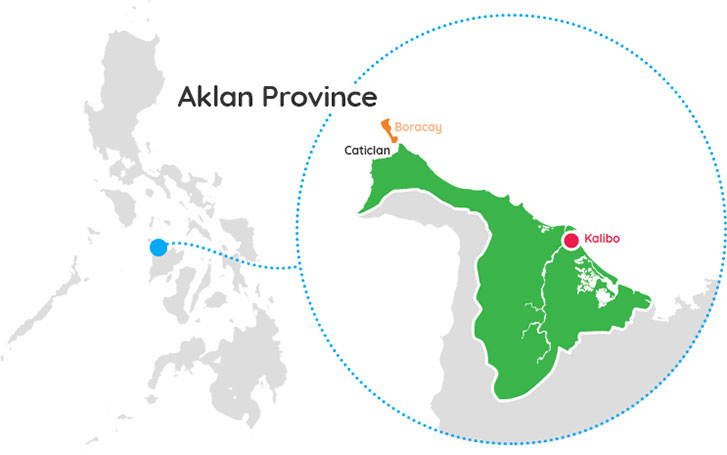 Aklan is a province in the Philippines located in the Western Visayas region. Its capital is Kalibo. The province is situated in the northwest portion of Panay Island. It is a progressive province whose empowered and peace-loving people live amidst a safer environment, stable and growing economy anchored on agro-ecological tourism development that is globally competitive and sustainable under responsive and accountable governance.

The climate in this province is relatively dry from November to April and wet during the rest of the year. Temperature is almost constant throughout the year. The coldest month is experienced on January measuring 26°C, it rises steadily to an average of 29°C in May, and then declines gradually to the January level.

If you’re looking for the very warmest time to visit Aklan, the hottest months are May, April, and then June. See the average monthly temperatures below. The warmest time of year is generally mid-May where highs are regularly around 90.3°F (32.4°C) with temperatures rarely dropping below 78.8°F (26°C) at night.

The most appropriate clothing for this province is casual light clothing: shorts, t-shirts, and sandals. Light jacket and pants at night, at higher elevations, and when boating.

The Aklan province is divided into 17 municipalities:

There is 1 island in Aklan:

The following is a list of points of interest relating to the Aklan province:

The following is a list of festivals celebrated in Aklan throughout the year:

The following are the most frequently asked questions about the Aklan province.

Where in the Philippines is Aklan located?
Aklan is located in the northwest portion of Panay Island.

Is Aklan a city or province?
Aklan is a province.

What is Aklan famous or known for?
Aklan is famous for Boracay Island and Ati-atihan Festival.

How do I get to Aklan?
There are several ways to get to Aklan, the most common being from Manila:

You can take the bus to Batangas and then ferry to Aklan. Travel time is approximately 15.5 hours and total fare is between $20 and $50.

How many islands are in Aklan?
There is 1 island in the province of Aklan.

Is Aklan safe?
Aklan is generally very safe for locals and tourists.

Is the climate the same as the rest of the Philippines?
The Aklan province is considered tropical and is similar to most provinces in the Philippines.