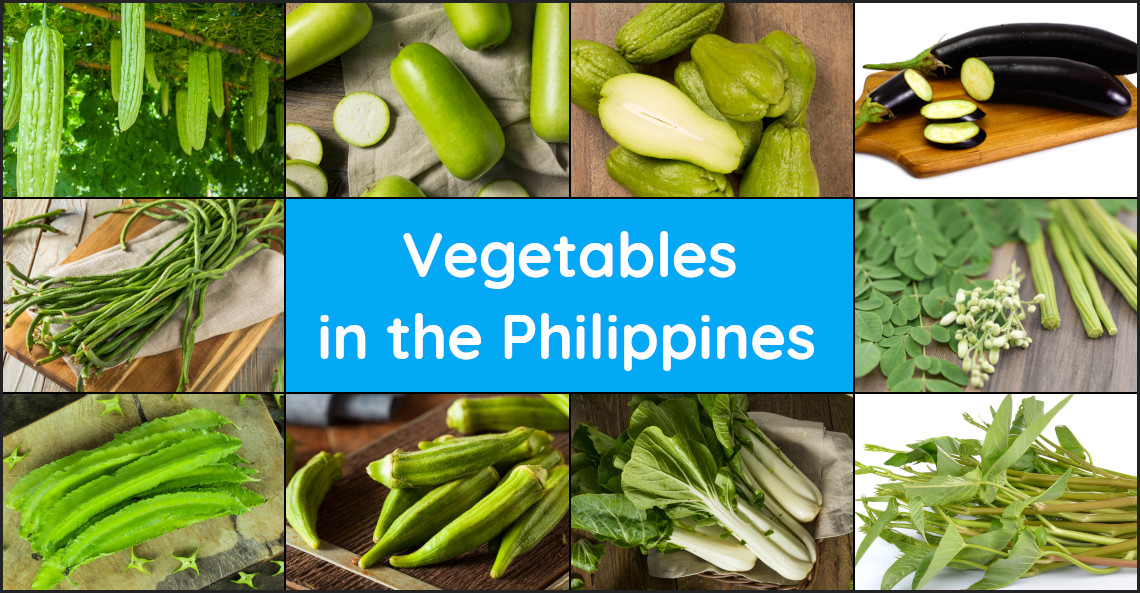 The world knows the Philippines as a tropical country blessed with thousands of islands, pristine beaches, and rich marine life.  The country is also a great destination to feast on fresh seafood, tropical fruits, and vegetables.  Yes, the Philippines also love their vegetables. It isn’t unusual to see backyards, especially in the provinces, lush with vegetables.

Farming is one of the major sources of income in the Philippines so the supply of vegetables is abundant.  There are various kinds of vegetables found in the country and here are the ten most popular.

Locally called ampalaya, bitter melon is known in the country for its culinary and medicinal uses.  It is distinct for its bitter taste and rough appearance.  Bitter melon is sauteed or stir-fried along with garlic, onion, tomatoes, and beaten eggs.  It is also prepared as tea or smoothie for people with diabetes.

Known in the Philippines as upo, bottle gourd is one of the popular ingredients when cooking various noodle dishes such as misua and sotanghon.  It is also sauteed together with pork and bean sprouts and used in tinola (vegetable soup) as a substitute for papaya.  For culinary purposes, bottle gourd is harvested young when the skin is still smooth and light green otherwise it will no longer be ideal for consumption.  Mature bottle gourd is used as a water container, dipper, or musical instrument.

Chayote is a pear-shaped vegetable that also belongs to the gourd family.  Locally known as sayote, chayote is popularly seen in noodle dishes including bihon, sotanghon or pancit guisado, chop suey, and tinola.  Chayote was one of the vegetables introduced into the Philippines through Manila galleon trade during the Spanish colonization.  It is now mostly grown in Benguet, Cordillera, and other mountainous parts of the country.

Eggplant, locally called talong, is distinct for its purple color and slender size.  It is well-loved by almost every Filipino when made into tortang talong, an omelette made by grilling the eggplant, removing the skin, dipping it into beaten eggs, and frying.  Grilled and skinned eggplant can also be used in making salad along with tomato, onion, and a bit of vinegar.  Other dishes which use eggplant include tinola and pinakbet.

Long bean is also called yardlong bean, asparagus bean, and pea bean but it is known in the Philippines as sitaw.  Despite the name yardlong bean, the average length of this vegetable is only about half a yard and is either green or purple.  You can see long beans in several Filipino dishes such as tinola, sinigang, beef or pork stew (nilaga), and fish stew.  It is also made into adobo.  Long beans are known to be a great source of a variety of vitamins and minerals including vitamin A and C, protein, thiamin, riboflavin, iron, phosphorus, and potassium.

Malunggay, as the locals call it, is so popular that almost every backyard, especially in the provinces, has one or two trees standing.  It is known as a superfood as it is packed with a significant amount of vitamins especially B vitamins, vitamin C, beta-carotene, vitamin K, manganese, calcium, and protein.  The leaves and flowers have been used in sinabawang gulay (vegetable soup) but lately, it’s gaining even more popularity and is now used in smoothies, pasta sauce, and baked goods such as malunggay pandesal.

Malunggay is also a favorite galactagogue of lactating moms.

Winged beans, or sigarilyas in the Philippines, is one of those nutrient-packed vegetables common in the garden as it is easy to grow and resistant to various diseases.  It is commonly used in tinola and sinigang but can also be sauteed or stir-fried. Winged beans are rich in vitamin A and C, calcium, and iron.

Ladies’ fingers in many English-speaking countries, okra is known for its slimy or gooey characteristic.  It is used in tinola, sinigang, and pinakbet.  It can also be sauteed or stir-fried and made into adobo.

Bok choy is more known in the Philippines as pechay.  Bok choy has green leaf blades with lighter bottoms that form a cluster similar to celery or mustard.  It is seen in dishes like nilaga and pochero or stir-fried, steamed, and boiled.

Aside from growing in water, water spinach, or kangkong, grows on moist soil too.  Water spinach is easy to grow and very low maintenance.  Both leaves and tender stem (cut into segments) are used in cooking fish stew, sinigang, ensaladang kangkong, and adobong kangkong.