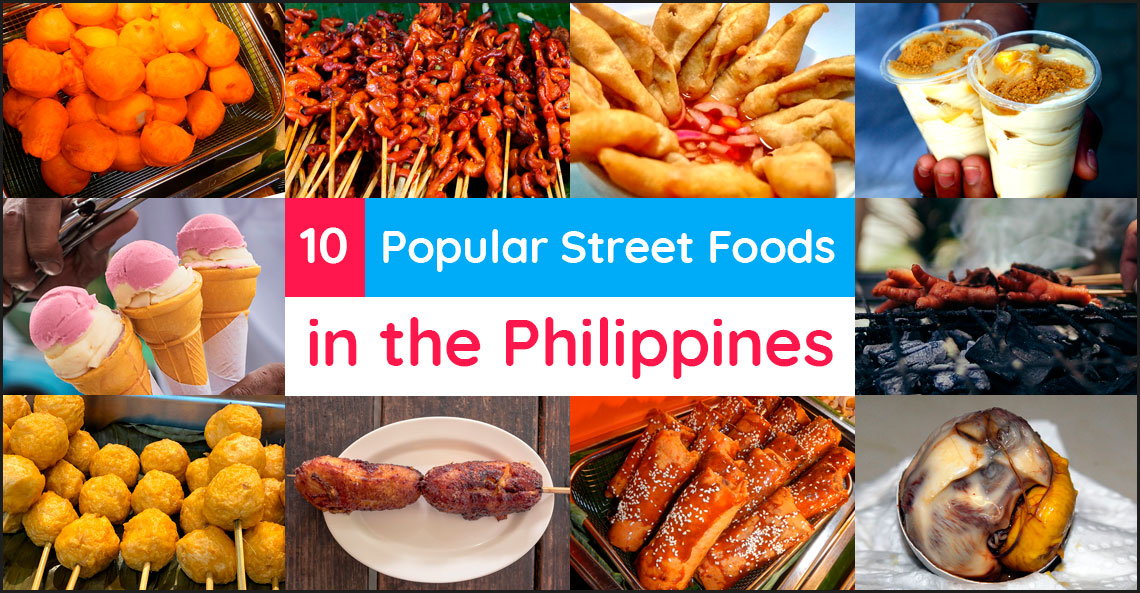 Street foods may not be your top choice when it comes to dining when in the country but your experience in the Philippines may not be complete without trying one, particularly the most popular ones.  Fortunately, street foods are so popular that finding them need not be difficult.  They can be found almost everywhere especially in big cities and popular tourist attractions.

Several restaurants have even included street foods on their menu and that’s the place for you to be if you have a sensitive stomach or are concerned about sanitation.  Otherwise, buying and eating on the streets makes for an authentic experience.

There’s a great variety of street foods in the Philippines but we are only listing the most popular ones you may not want to miss.

Isaw dominates all other types of street foods when it comes to popularity.  Isaw is made of animal intestines, specifically that of chicken but pig’s is used too.  These intestines are cleaned thoroughly, coiled into skewers, and boiled with water, vinegar, salt, pepper, and other preferred seasoning.  They are then grilled and basted with a mixture of cooking oil, ketchup, and soy sauce.

Isaw can be eaten as snacks, with rice, or with a bottle of ice cold beer.

Another favorite street snack, fish and squid balls actually contain more flour than meat.  They are then deep fried using a wok where diners can poke (locally referred to as tusok) the balls using a skewer and dip them into a sauce that is either spicy or sweet and spicy.

Take note that double-dipping the skewer in the sauce container is strictly prohibited to avoid public health risks.

Inspired by Chinese cuisine which is made of mince meat and vegetables, kikiam in the Philippines contains fish meat and a lot of fillers.  They are brown and shaped like a finger.  Like fish and squid balls, they are deep fried and dipped in the similar sauce.

Balut is not for the faint of heart.  It is a boiled duck fetus, ranging from 14 to 21 days old, commonly sold in the streets all over the country.  Eaten from the shell, it is usually sprinkled with a little bit of salt before eating.  Balut is a popular nutritious snack that is high in protein and calcium.

Named after the shoe brand with the three stripes, adidas refers to skewered chicken feet grilled over charcoal.  While there isn’t a lot of meat to eat there, the skin surrounding the feet is tasty especially when dipped in sauce.

Like the Filipino pork barbecue, banana and camote (sweet potato) cue are also served on skewers.  But instead of being tasty, banana and camote are sweet since they are deep fried, coated with caramelized brown sugar, and sometimes sprinkled with sesame seeds.

Like banana and camote cue, turon is also a sweet snack.  Turon is made of banana wrapped in lumpia (spring roll) wrapper, deep fried, and coated with caramelized brown sugar.  The snack comes in a few varieties including banana with jackfruit and sticky rice with jackfruit.  SM Supermarkets are known all over the country for selling large turon.

Taho is made of fresh or silken tofu, arnibal syrup (sweetener), and sago (tapioca) pearls.  It is often served in a plastic cup and can be sipped up with a straw as it is so soft.  Vendors are known to peddle their taho around the neighbor while shouting the signature “Tahooooooo!”.

Baguio has a strawberry version of this popular breakfast alternative.

Dubbed as “dirty ice cream”, sorbetes is a Filipino ice cream that is usually made from a combination of coconut or powdered milk and cassava flour.  Common flavors include coconut, cheese, chocolate, mango, and ube but adventurous ice cream makers have come up with more interesting flavors such as durian, malunggay, ginger, and other local ingredients.  It is sold from stainless steel containers inside colorful wooden carts and is peddled around the neighborhood.  Dirty ice cream is not actually dirty, it is named as such to differentiate it from store-bought ice cream.

If you aim to experience street foods in the Philippines, consider this list for a start.  There are more, of course, and you’ll surely get to know them as you continue to explore the country.