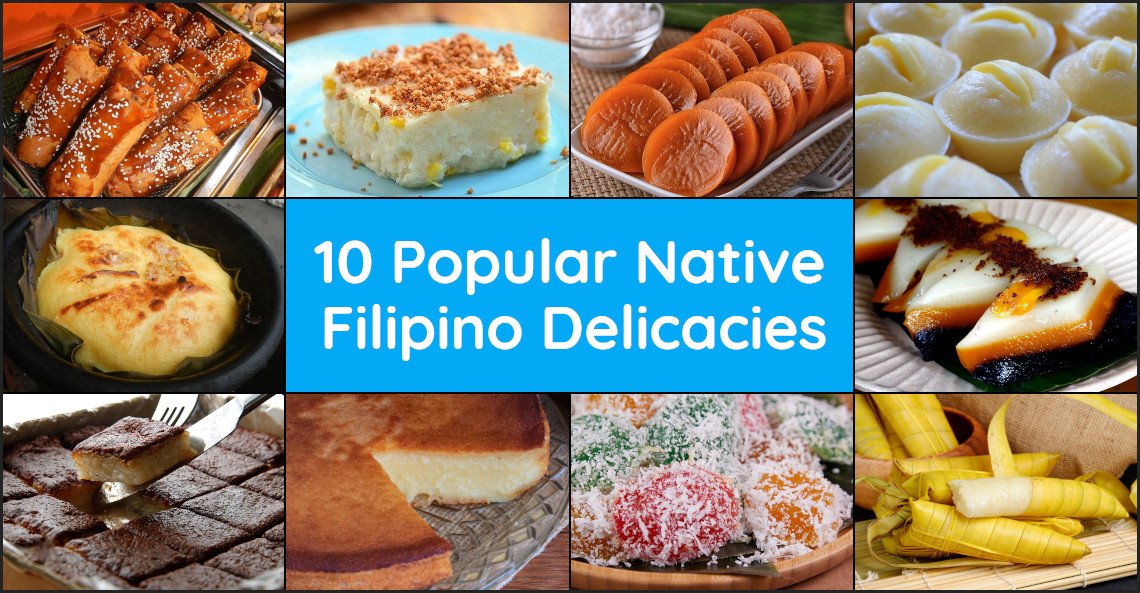 Filipino native delicacies are usually made from a combination of glutinous rice (also called sticky rice and locally called malagkit na bigas), coconut milk, sugar, cassava, and young coconut meat.  Back in the day, they were popular foods during events such as fiestas, halloween, Christmas, New Year, and birthday but they are now available in restaurants, mall food stalls, and being peddled by street food vendors everyday.

Below is the list of the 10 popular native Filipino delicacies.

Sain-sapin is a layered delicacy made from a mixture of milled glutinous rice, coconut milk, sugar, water, flavoring, and coloring.  The mixture is then divided into three equal parts, colored separately, and each part is steamed on top of the other to create layers.  It is then sprinkled with latik (toasted coconut milk curd) or toasted desiccated coconut.  To enhance the flavor, other ingredients such as ube halaya and ripe jackfruit are added to the mixture.

Sapin-sapin is derived from the Ibanag term sapin which means layers.

Bibingka is commonly sold in markets, food stalls, and outside churches especially during the Christmas season.  It is made of milled glutinous rice, coconut milk, and sugar.  Placed in the mold lined with coconut leaves, it is then cooked in a  traditional oven called bibingka oven.  It is then topped with margarine or butter and sprinkled with sugar, cheese, or grated coconut.

Biko is a sweet and chewy rice cake made from glutinous rice, brown sugar, and coconut milk.  It is one of the easiest delicacies to cook as the glutinous rice is cooked the same way rice is cooked.  It is then added into the brown sugar and coconut milk mixture being cooked in low heat.  Although not necessary, biko is commonly topped with latik and traditionally served as patties served atop or wrapped in banana leaves.

Puto is a popular delicacy eaten as a snack or breakfast food.  It is a steamed rice cake made of milled plain rice, sugar, and coconut milk.  The mixture is placed into a mold with or without banana leaves lining.  It is then steamed until it becomes firm to the touch.  Aside from the classic version, it now comes in a range of flavors including cheese, pandan, ube, and even used to create a hybrid leche flan called puto flan.

Aside from puto, another delicacy made of milled rice is kutsinta.  Kutsinta is a steamed rice cake known for its brown color with a sticky and slightly rubbery texture.  It is often topped with grated coconut or cheese.

Maja Blanca is a pudding made of coconut milk, cornstarch, and sugar.  The mixture is cooked over low fire and continuously stirred until thick and eventually forms into gelatin when cooled.  Maja Blanca is known for its creamy and soft texture and delectable milky flavor.  Some versions include sweet corn kernels, tapioca, and young coconut strips.

Pichi-pichi is a gelatinous delicacy made from steamed cassava mixed with sugar.  It is distinct for its green color as it is flavored with pandan leaves although lye is sometimes used.  It is served coated with grated coconut or cheese.

Suman is a rice cake made from glutinous rice and coconut milk.  The mixture is wrapped in banana leaves or palm leaves and then steamed until the rice is cooked.  It can be eaten with brown sugar, ripe mangoes, or latik.

Turon is a famous Filipino food made of banana wrapped in spring roll wrapper and deep fried until crispy.  It is then coated with caramelized brown sugar and sometimes sprinkled with sesame seeds.  Aside from just plain bananas, other versions of turon include banana with jackfruit and sticky rice with jackfruit.  SM Supermarkets are known all over the country for selling large turon but it is also sold by food vendors in the streets.