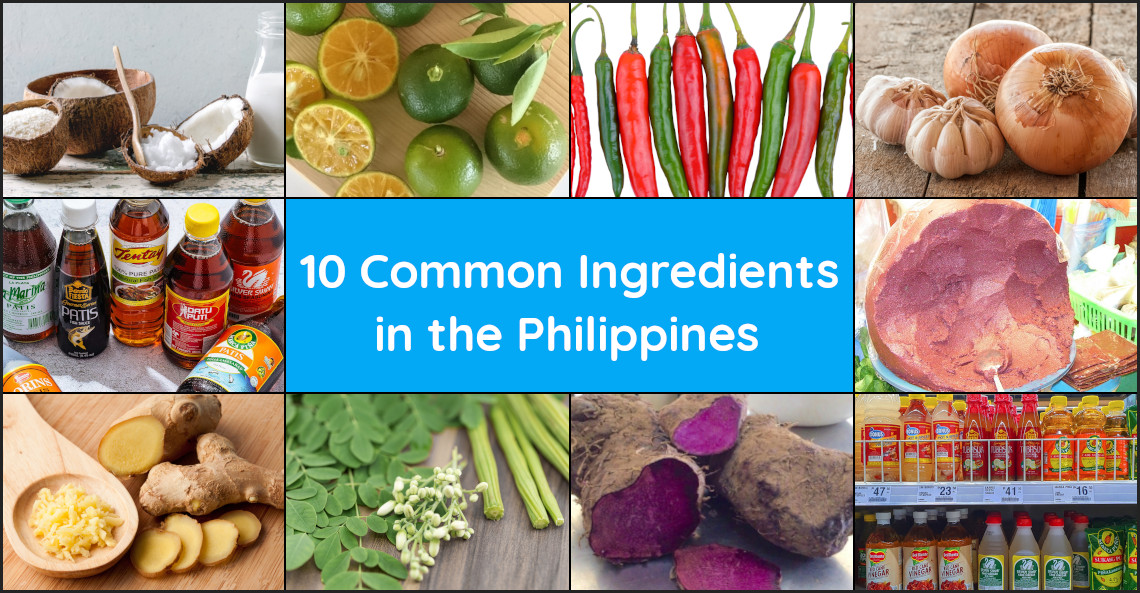 Filipino cuisine features traditional dishes from various ethnic groups in the country with influences from Chinese, Spanish, and American cuisine due to trading and years of colonization.  Filipino dishes vary from everyday meals like fish stew and fried fish, to elaborate meals prepared only during special occasions like lechon, kaldereta, dinuguan, and many others.  But, whether it be a simple dish or an elaborate one, the dishes in the Philippines often share one or two common ingredients.

Here are the most common ingredients used in the Philippines.

Native to the Philippines, calamansi (Citrus × microcarpa) has a tangy and aromatic tiny fruit popularly used in marinades and dipping sauce particularly for grilled meat and seafood.  It is also used to enhance the flavor of various noodle dishes and is made into juice, fruit shakes, and baked goods like muffin.  Calamansi is also known as calamondin and Philippine lime, and is available year round all over the country.

The most common fruit in the Philippines, coconut is also one of the most popular ingredients.  It is used in various forms from its water and milk to meat of young and mature coconut.  Coconut water is used in dishes like binakol while the milk derived from squeezing the grated mature coconut is used in so many dishes and native delicacies.  In fact, almost every rice cake in the country is cooked with coconut milk.  Young coconut is used for various desserts such as bukayo, buko pandan, and salad which also contains nata de coco, a coconut gel produced by fermentation of coconut water.

There are two kinds of chilies used for cooking in the Philippines.  Siling labuyo, the smaller type, is known for its spiciness.  It is usually crushed or sliced and mixed into foods to achieve that very hot flavor.  Siling Haba, the finger-length one, is not as spicy and is one of the common ingredients used in the Philippines to remove bad odor especially in seafood dishes.

One of the initial steps in cooking most Filipino dishes is by sautéing using garlic and onion.  Even everyday foods such as scrambled eggs may contain garlic while sinabawang isda (fish soup) and sinabawang gulay (vegetable soup) contain sliced onions.

While the smell of bagoong may repel others, it is actually a beloved condiment among Filipinos.  Bagoong is either made of fermented fish (bagoong isda) or fermented krill or shrimp (bagoong alamang).  Aside from its strong smell, it also has a salty taste and is pinkish to reddish in color.  It is often sauteed in garlic, cooked with pork, made into dipping sauce, served with kare-kare, and an ingredient in pinakbet.  It is also popularly partnered with green mangoes which is drool worthy for almost every Filipino.

Like bagoong, fish sauce is also a fermented fish or krill but in liquid form.  It is distinct for its very salty taste and strong smell.  It is used in various dishes and as dipping sauce.

Available year-round, ginger is known not only for its culinary uses but for its medicinal properties as well.  It is used to enhance the flavor of dishes such as paksiw and dinuguan, and is used to make salabat or Filipino’s ginger tea.

Malunggay, scientifically called moringa oleifera, or simply moringa, is one of the most common ingredients used by people in the Philippines particularly those with health concerns as it is known as a superfood packed with significant amount of vitamins especially B Vitamins, Vitamin C, beta-carotene, vitamin K, manganese, calcium, and protein.  The leaves and flowers have been used in sinabawang gulay (vegetable soup) but lately, it’s gaining even more popularity and is now used in smoothies, pasta sauce, and baked goods such as malunggay pandesal.

Malunggay is also a favorite galactagogue of lactating moms.

Ube (discorea alata), also known as purple yam, is a tuber known for its distinct vivid purple color.  It has a mildly sweet taste and is used in desserts such as cakes, breads, donuts, jam (locally referred to as ube halaya), and ice cream as well as shakes and smoothies.  It can even be boiled or baked and eaten on its own.

Vinegar is a kitchen staple known for its sour taste.  It is used in helping preserve food and is used in several dishes including paksiw, adobo, kinilaw (Filipino version of ceviche), dinuguan, and many others.  It is also mixed with soy sauce, chili, and garlic to make a dipping sauce.